Happy 50th anniversary of Earth Day! We’ve come a long way!? If only we knew then what we know now…no, wait, some did!

During the event, we usually ask each team to make an on location 30-second Earth Day PSA video…some are fun.

…We will get to Bali, but first you have to literally get to Bali and the road from Yogyakarta to the island is an adventurous one. I recounted my late-80’s journey between the two in my 200o booked entitled A Blind Date with the World. It is a 14 hour journey…in the best of time…through some amazing streets with no names on the island of Java. But there are few treasures to behold enroute…Imogiri, Borobudur, the Prambanan Temples and the volcanoes of the Tengger massif, specifically Mount Bromo. We sent some intrepid adventures there on our 2011 event. Today’s post is longer but fuller than some others…Indonesia’s like that.

Our first memory today from Indonesia comes from two my favorite people who we miss a lot…they participated a few times on our event and have since taken to raising their kids…please enjoy David and Natasha, the Silver Surfers 2011 memory:

“We were in Yogyakarta and started our multi-day trek to Mount Bromo. We first took a train to Solo. From Solo, we then boarded our next train for Surabaya. This train was air conditioned and we had first class seats so it was a comfortable ride. But it was about a 6 hour train ride or so. We were traveling with two other teams Lawyers without Borders and Sister Act. By the end of the Surabaya train ride, we were all starting to get tired of this never-ending journey. Most of us were asleep when we were startled by the train stopping and thought it was time to get off. We exited the train in a mad dash only to realize (once the train had already left the station) that we exited one stop too early! It was funny for two seconds. We quickly realized we were at a packed train station in the middle of nowhere, where EVERYONE stopped what they were doing and were staring at us. For a few seconds you could have heard a pin drop. After looking for an English speaker, we finally found a security guard that helped us with hand signals and broken English. We finally found ourselves on the next train headed for the next stop.

“We made it to Surabaya, and boarded yet a third train to Probolingo. This was one of the worst experiences of my life (or at least I thought so at the time). When we boarded the train, there were cockroaches crawling on the walls. There was NO air conditioning and it was hot as hell. Sweat was pouring down my back, legs, etc. The train smelled really bad also. We had to ride this train several hours to Probolingo. It was truly miserable but looking back it was an experience that I will cherish forever. David made friends on the train and had a good time talking with them. When we finally arrived in Problingo, we were so relieved to be off the train. It was now around midnight and we exited the train to find three lonely rickshaws and nothing else but crickets. No taxis, no people, no light. A lone rickshaw driver made a call and all of a sudden we had more rickshaws. The rickshaw drivers convinced us to get in the rickshaws and David and Rainey ran along side until even more rickshaws showed up. The drivers took us to their friend’s house in what felt like a secluded neighborhood in the middle of nowhere. I was convinced we were being set up and were going to be robbed at any minute. I started shoving our passports and money into my bra. But I was wrong and completely misjudged. The “friend” was a travel agent in Probolingo and was exactly who we needed.

“We left for the mountain at about 2:30AM and arrived around 4:00AM. We were taken by a 4-wheel drive jeep a part of the way and then trekked the last mile to the top. We made it to the top in time to see the sunrise and it was spectacular! We were standing on the top of a volcano and there were volcanoes all around us. Truly a one of a kind experience and view.

“Looking back, I would do it again in a heartbeat. Such an experience, pushing my physical limits, exploring Indonesia like the locals and problem-solving along the way.  It was such an adventure.” 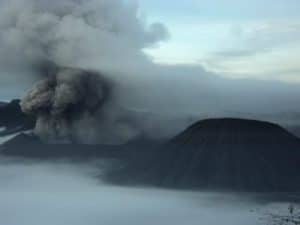 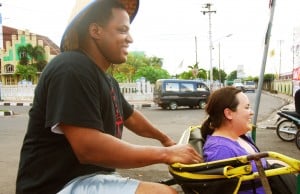 …and The Silversurfers rickshaw racing

Bali conjures up in the imagination exotic, with a capital E. And rightly so, the tranquil and beautiful Spice Island is exotic, but it has changed a lot since my first visit in the 80’s. A lot! Mass industrial strength tourism will do that. Today, Bali is derisively known as Sydney North, due to the migratory influx of Aussie travelers–some of high quality, some not so much. It is kind of like their version of America’s Cancun resort beaches. I read just the other day, that Covid-19 was wreaking havoc on the island economy, with no visitors coming to the island, that is now 80% tourism-dependent! That is approaching addict dependency.

We have two memories from two different stops in Bali, the first today comes from Tania & Mickey, two more of our favorite people (Hello Arjun & Bobby!), fondly known as Team Bird & Buns in 2015.

“This challenge was based in Bali and said (in typical understated Bill fashion) ‘go to temple festival’ (75 points). It was a long and winding and winding and winding taxi ride to the base of this mountain where this festival was held at a temple at the top of a very high hill. It was raining and we were both pretty exhausted and carsick from from the long ride. When we finally got there, we were told by the taxi driver that we could only go to the Hindu festival if we were dressed in appropriate clothing. Seeing what we were dressed in, he invited us to his house to use some his family’s clothes. That led his entire family coming around to dress us.  That led to a meal that we all shared, and then we headed out to the festival (at Besakih Temple). We had to climb hundreds of stairs and ended up in a very packed but intimate and sacred feeling space. It was really interesting to me, since I grew up in a Hindu house to see how this festival had morphed into something very different here in Indonesia. Tania and I had kind of eloped a week before the race, and The Global Scavenger Hunt was our ‘honeymoon’. Sitting alone but surrounded by thousands of people, holding hands and flowers in a light rain felt like a special and private wedding ceremony. We couldn’t resist taking our ‘wedding picture’ with these kids with their sunglasses. This challenge took all day and wasn’t worth the ‘points’  but was totally worth the memories.” 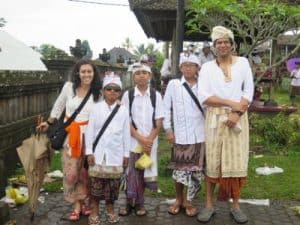 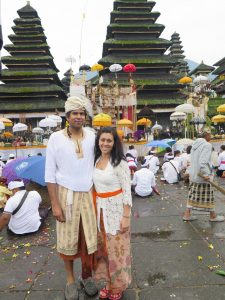 Buns & Bird with friends and solo together…(they have 2 ‘lil others to travel with now!)

Our second memory from Bali comes from fellow Canadian Marc (Although he’s from Alberta and we Ontarians don’t see them that way…it’s a culture thing! I joke…), a member of the 2011 team Faster than Roadkill.

That was taken at the Elephant Sanctuary in Bali where I went by myself as James, my teammate, was doing a cooking class back at the hotel.  I have always enjoyed time with animals and was even a junior keeper in my teens at the Calgary Zoo. I was lucky to spend time with my new friend, Bagoose, there while his mother watched.  His name means handsome and he was certainly the character; full of mischief and wanted attention.  He came right over to me and started inspecting my backpack and pockets looking for treats.  Obviously I wasn’t the first person who did this. The time I got to spend with him was not only the highlight of my Global Scavenger Hunt but one of the incredibly memorable moments in my life.” 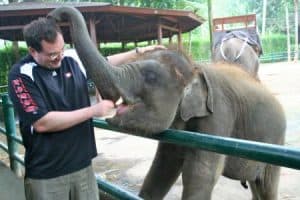 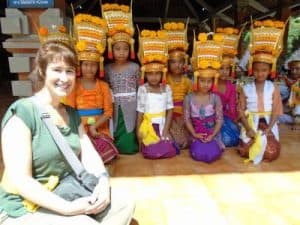 So now, one of my more unique Balinese memories took place in Ubud, while I was sitting on my tranquil terrace overlooking the verdant green rice paddies tailor across the valley, when the smiling gentlemen delivering my ice cold beers arrives. The man is in his late-twenties–although it is hard to tell with Asians–white expressive grin and strong as an ox by the looks of his form-fitting kamen (aka sarong) hotel garb. He could be a reformed Kuta Cowboy, I think to myself (aka pemburu-bule or rich white woman hunter). Rapid, albeit somewhat awkward small talk ensues: the weather, the rice paddies, hotel business…until sensing my interest in shared conversation, he gently puts down his tray full of my now empty cups of civet-induced Kopi Luwak coffee, takes a seat on the stairs to my bungalow in order to summarily unload his weary soul. His is a sad story. And as sad stories go, there is a woman involved…and another man. In this case a Javanese man. An outsider. A Muslim, he explains. A double whammy, for the most part, the population of Bali is over 85% Balinese Hindu and the Javanese are all notorious criminals according to the Balinese, island interlopers all. …I confide in him that I feel his pain, that his story is shared the world over, by men everywhere. A type of emotional globalization. But as his story continues to unfold, there is an inevitable confrontation between the two men. There’s a fight. A bottle is gripped. A rock is grabbed in self-defence. A fall is taken. A sickening thud is heard by the witnesses. And he kills him! I do a involuntary spit take with my mouth full of Bintang beer. Yep, he reconfirms it, he killed him! Although entirely inadvertently, I am told in no uncertain terms. An act of voluntary manslaughter would be the charge in our books, not first degree murder. His eyes are mournful when he expresses this to me; like he was punished, but not too much. It occured last rainy season, he informs. After a few beats of healing reflective silence between us, I had to ask him: So, what happened to the girl? Without a beat he informs me that they still do see each other, but that she is reluctant and doesn’t want to get married yet, although he clearly thinks he’s earned her, he says…finally ending with the fact that she’s actually my maid, and that he would greatly appreciate it if I implored her to do so the next time I saw her! Ain’t love grand…

Well, as I like to tell our travelers, it’s time to reposition ourselves in another part of the world, so we leave the lasting memories of Southeast Asia for the edges of the Indian subcontinent…with our first stop tomorrow being Myanmar.

Stay safe and well. Till tomorrow…

PrevPrevious28 Hours in the Life of a Professional Traveler (circa 2019)
NextDay 5: Malaysia…Who knew?Next