Thrilled, I shared a trip around the world with Kenneth in 1989, competing together in a crazy global race from San Francisco to New York City (the long way)  on public transportation called the HumanRace.

His curious and boisterous spirit was exhibited front and center from the moment you met him…”Her Britannic Majesty’s  Secretary of State Requests and requires in the Name of Her Majesty all those whom it may concern to allow the bearer to pass freely without let or hindrance, and to afford the bearer such assistance and protection as may be necessary,” he would proudly proclaim with a loud thump of his hand on a table as he bared his British passport. Kenneth was a gracious and vibrant storyteller always accompanied with his tweed jacket, deerstalker and brolly. You couldn’t not like him.

I am privileged to have known him and been able to spend some interesting times traveling the world with him and sharing a pint, or two, on occasion. My condolences go to his family and many friends.

You will be missed Kenneth. 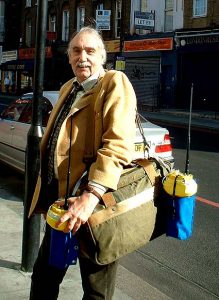 Kenneth Crutchlow, a champion of the lonely, treacherous sport of ocean rowing and easily one of the most audacious and intriguing chaps ever to grace Sonoma County, died Sunday in his native England.

Crutchlow, a daredevil and risk-taker who all his life pushed the boundaries of human experience and had a heck of lot of fun doing so, was 71.

He had hitchhiked and talked his way around the world — for the prize of a beer — when he settled in Sonoma County in 1976. Five years later, he shipped over a small fleet of black London cabs and opened a taxi service in the town of Sonoma; he expanded later into Santa Rosa and Healdsburg.

For decades, the dominant passion of the lanky entrepreneur and adventurer was ocean rowing, typically involving a single adventurer in a small, efficient, manually powered boat.

In 1983, Crutchlow was the chief supporter and advocate of fellow British subject Peter Bird’s first-ever row from San Francisco to Australia’s Great Barrier Reef. It was history’s longest nonstop row, 294 days and 9,000 miles.

Also in ’83, Crutchlow and Bird founded the Ocean Rowing Society International to monitor and advance the efforts of people bold enough to take on oceans alone.

With Crutchlow as his manager, Bird attempted five times to become the first person to row the north Pacific from Russia to California. He was lost at sea on a voyage that began in March 1996.

Though heartbroken by his friend’s death, Crutchlow continued to encourage and assist ocean rowers. For years, he directed the Ocean Rowing Society from an office in Santa Rosa.

At various times in his bold, utterly unpredictable life, Crutchlow pushed himself in running shoes or on a bike or in a swimsuit up mountains, across Death Valley and through the frigid waters from Alcatraz to the San Francisco shoreline.

His global perspective, fearlessness and compassion drove him also, more than 30 years ago, to spearhead the release of a British treasure hunter jailed in Vietnam. Several years after that, he successfully pressed for the freedom of two Thai fishermen imprisoned in Vietnam for having ferried the treasure hunter to an island there.

Crutchlow went broke mounting those humanitarian missions. For much of his life, his finances ebbed and flowed dramatically as he threw himself into ventures the typical person would avoid like a pit of crocodiles.

Crutchlow returned to London a number of years ago. His wife, Tatiana, was with him when he died Sunday of stomach cancer.

Friend Kirk Veale, a longtime Santa Rosa businessman who had helped to sponsor Bird’s rows, revered Crutchlow as an extraordinary, visionary man able “to experience life far beyond what the normal person would ever experience.”

Added Veale, “He did it, unbelievably, on no money.”

Said Guerneville resident Tom Lynch, who had traveled with Crutchlow and witnessed his fearless verve, “Oh, my God, he was a character. It’s a sad day.”

There are preliminary plans for a celebration of Crutchlow’s intrepid and colorful life in the North Bay in the spring.